The figures in the Crib we use at Christmas were made by a long standing member of our church - Mrs Margery Price. 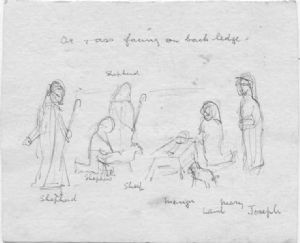 Her original sketch of how it should look is shown on the right. She later wrote about how she came to make the figures:-

It must have been in 1940 that I made the figures for my Sunday School class, which was held in St Mary’s Hall after a short service in church at 10 o’clock every Sunday morning.  In telling the children about the birth of Jesus that 1st Christmas, I thought it would help if I made some figures, so I used ordinary modelling clay, and when dry painted them with my oil paints.

I made Mary and Joseph, and a little manger with the baby in it, then a lamb looking up on one side, and a shepherd-boy kneeling on the other side with a sheep.  I can’t remember if I made the other 2 shepherds and sheep that year or the next.

It must have been the Sunday before Christmas, because the Vicar happened to come in after the end of my lesson, and when he saw the figures he said, ‘Oh! but they are much too good only to be seen by the children here, we must put them in church for everyone to see on Christmas Day.’

So we carried them across, and arranged them on a table where the Choir sit now – in those days the Choir were on both sides of the Chancel, facing each other.

Everyone saw the figures and liked them so much that a man from Dockenfield, (can’t remember his name) made the lovely stable that still goes on now, and we fixed a light in it too, so next year the figures looked much better.

I made an ox and an ass, another sheep and 2 bigger shepherds, hay on the ground, and it has gone on every year ever since.  The crib was moved to its present place on the Chancel step where it can be seen better.

A year or two later I made the Wise Men to replace the Shepherds at Epiphany and another set of Crib figures for Dockenfield.  I think those figures were properly fired, not just dried clay like the Frensham ones, so should be stronger – but long may ours last!